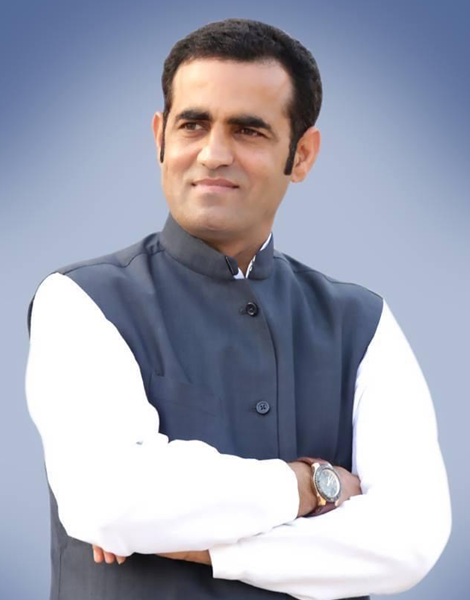 Amin Pathan, currently, is the Chairperson of the Dargah Committee Dargah Khwaja Saheb Ajmer (Government of India). Alongside this bureaucratic post, Amin also is the Vice – President of the prestigious Rajasthan Cricket Association. His success, as easy as it may seem, didn’t occur overnight. Amin has had his share of struggles and has prevailed all his life.

Born on May 7th, 1973 to Mr. Amir Mohammad Pathan and Mrs. Rabiya Pathan in middle – class family, he saw the adversities of life right from the beginning. As he grew, he dived more into social structure of the society and worked for uplifting of poor masses. On many occasions he fought for the basic needs of the poor. The years of youth made him realise that in order to work towards the upliftment of the needy and poor he will be required to enter the field of politics. He completed most of his education from Kota and Indore. Simultaneously, the love for cricket also kept growing and bigger ideas had already started to shape up.

Amin is married to Mrs. Raziya Pathan and they both are blessed with two kids. His son Anas Pathan is following his father’s footsteps and is all set to try his hands in political field, however, daughter Arba Pathan is more inclined towards academics and aspires to join Indian Administrative Services. Amin prioritises his career and work but not at the cost of spending quality time with his family.

Right from his adolescent years Amin was inclined towards social work. He fondly admits that these are the attributes he got in legacy. His father and mother are also remembered as benevolent individuals in the society.
Amin is the chairman of the Anantpura Hitkari Society, an NGO which is well known for their public social work since 2002. Also, he heads the Tehreek Aman E Hind society, another NGO serving the needy since 2013. Over the years, both the bodies have stood with the poor and needy during their thick and thin times. In order to provide quality education to the poor kids, Amin, in 2008 started Darool Uloom Tehreek E Hind School. The school provides free education to almost 250 kids every year.
Both the NGO’s under the guidance of Amin left no stone unturned during the unprecedented times of Covid – 19. The social work bodies made sure to distribute food, water and clothes to the needy throughout the duration of the lockdown.

Cricket could easily be termed as one of the most integral part of Amin’s life. His love for the sport has no boundaries. His active involvement in cricket administration makes him a multi faceted personality. Amin was a prolific fast bowler during his cricketing days.
In 2003, he became the secretary of Kota District Cricket Association and has been elected for the same till date. The introduction of Lalit Modi to Rajasthan cricket in 2005 changed the dynamics of cricket in the state. Same year, Lalit Modi was elected as the president of RCA and Amin bagged the post of joint secretary in the same tenure. His acute decision making skills caught the eyes of bosses and he was further asked to join the junior cricket committee of BCCI in 2008. By 2014 things started turning gloomy and Rajasthan cricket saw the worst possible years of its existence. The internal feud between Lalit Modi and BCCI resulted in the suspension of Rajasthan Cricket Association by the BCCI. Rajasthan Cricket Association was deprived of hosting/participating in any national cricket tournaments. Amin, during that time was in extreme despair to see the condition of cricket in Rajasthan. He then took a bold step and toppled the Lalit Modi regime in 2014. Things took time but eventually cricket returned to Rajasthan Cricket Association in 2019. Currently, he is part of the executive committee of Rajasthan Cricket Association under the capacity of Vice President.
Justifying his visionary characteristics, Amin also started Anantpura Cricket Academy in Kota. The academy provides free cricket coaching to talented and less privileged individuals.

He is an avid reader and loves to keep himself updated with the history and political books. He loves to spend time with children and his pets, a german shepherd dog and a persian cat. He also loves to watch cricket videos from yesteryears and doesn't shy away from swinging the bat as and when time permits.

He joined BJP in 1996 and over the years worked closely with the youth and minority wings of the party.
The year 2005 eventually witnessed his advent in active politics. Thanks to the face value he had earned due to his benevolent nature, he convincingly won the Nagar Nigam Kota elections and served as a ward corporator from 2004-2009. His hard work and close proximity with the then Chief Minister of the state, Smt. Vasundhara Raje Scindia helped him earn the post of State President for BJP Minority Wing. This four year tenure not only helped him create a bigger aura for himself but also allowed him to show his commitment to the party. He tirelessly worked during the 2014 state elections and played a pivotal role in garnering the minority votes for BJP. His go getter kind of persona did not go unnoticed and he was promoted as the National Minister for the BJP Minority Wing (2015-2018). As the scope of work widened, Amin grabbed the opportunity with both hands. His meteoric rise amongst the minority base of the country did help the party on several occasions.
The year 2016, witnessed Amin Pathan deservingly taking the chair of the Rajasthan State Haj Committee (State Minister). The word has it that this was the time when the holy pilgrims for Haj travel almost reported no issues. His easy approachability to the masses made him a cynosure of many eyes. This further augmented his benevolent aura and he became a known name inside the political lobbies. His term lasted for three years wherein he selflessly served the masses.
Amin, wholeheartedly thanks Sh. Mukhtar Abbas Naqvi for the unconditional support he bestowed on him during his tenure. He further adds, Naqvi ji was very particular about the well being of each and every pilgrim. He made sure that all activities were taken care of without any hindrances. Post providing his services as Chairperson of Hajj Committee (Govt. of Rajasth), he currently is the Chairman of the holy shrine Dargah Khwaja Sahab, Ajmer for the past four years. The apex body of the shrine reports directly to the Ministry of Minority Affairs - Govt. of India.
Amin recently completed four years at this role, which in itself is a testimony of the great work values he possesses. Over the years, the Shrine has witnessed monumental renovation and construction projects including 188 restrooms for women and creation of the 'Silver Katahra' at Astana Sharif, a new fountain, and the repair of Nizam Gate and AkbariMasjid. Also, in collaboration with Ajmer District Administration, Anjuman Society and Dargah Diwan he has tirelessly worked towards providing good facilities to Dargah Shareef and all the pilgrims.